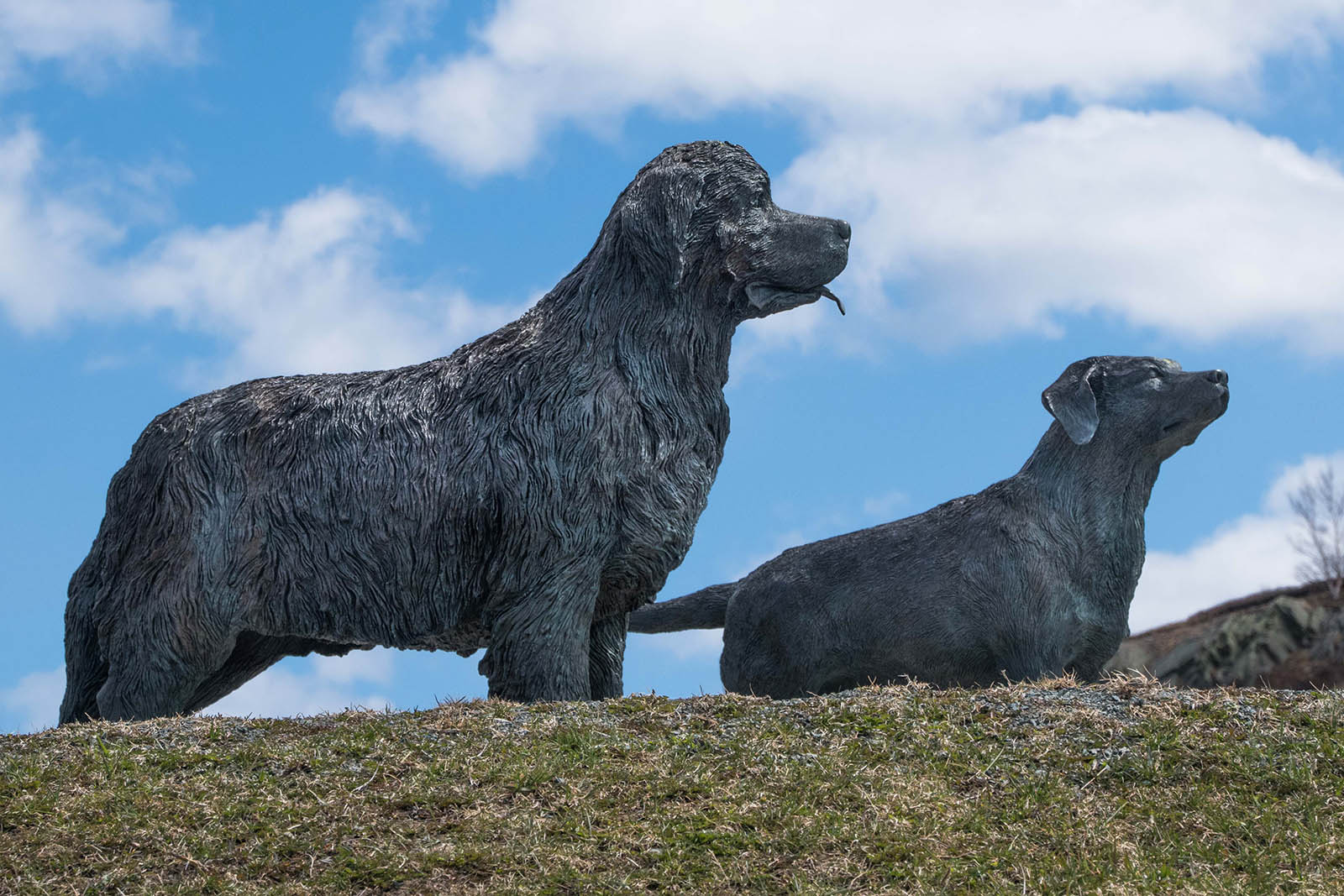 The artist Luben Boykov was commissioned to create two sets of Newfoundland and Labrador dogs. The pair here in front of the Geo Centre on Signal Hill face toward downtown St John's, and the pair in Harbourside Park look towards the harbour. They are slightly bigger than life-size and were created in such a way that people can interact with them in different ways - people pet them, and kids climb up and pretend to ride them.

The models for these sculptures were Abraham, a Newfoundland dog, and Hudson, a Labrador Retriever.

Luben Boykov was born in 1960 in Sofia, Bulgaria. In 1987 he graduated from the Academy of Fine Arts in Sofia with a MFA in sculpture. In early 1990 he immigrated to Canada with his family. He has exhibited locally, nationally and internationally and has more than 30 public sculpture commissions and numerous awards to his credit. Recently, Luben ‘s work has been exhibited at the Palazzo Nicolaci, Noto, Italy; Musee des Beaux Arts Montreal, Canada; The Rooms Provincial Art Gallery, St. John's, Canada; Nashua, USA; Orvieto, Italy; Salt Lake City, USA; Loveland, USA; Brookline, USA, Sofia, Bulgaria. Luben Boykov has exhibited in numerous group exhibitions at public venues alongside artists, such as: Henry Moore, Giorgio De Chirico, Fernand Leger, Igor Mitoraj, Michelangelo Pistoletto, Fernando Botero, Keith Haring, et al. Adrienne Clarkson, Governor General of Canada and Queen Elizabeth II are among the dignitaries who have unveiled some of Boykov’s public sculptures. Luben Boykov has received more than 40 grants for artistic creation from regional, national and international granting agencies. He is the recipient of the Medal of the President of the Italian Republic at the Dante Biennale in Ravenna. In 2001 Luben received the "The Artist of the Year" award from Arts NL, Canada. In 2010 he was awarded the "Art Excellence Award", VANL-CARFAC, Canada. In 2013 Queen Elizabeth II awarded Luben Boykov the "Diamond Jubilee Medal" for his contributions to Canadian society and culture. In 2015 Luben Boykov was inducted into the Royal Canadian Academy. Currently (2021), together with his wife Elena Popova, he is the subject of a feature-length documentary about their life and work, produced by the National Film Board of Canada. (https://www.youtube.com/watch?v=V3x53TcCAn4&t=2894s&ab_channel=NFB).