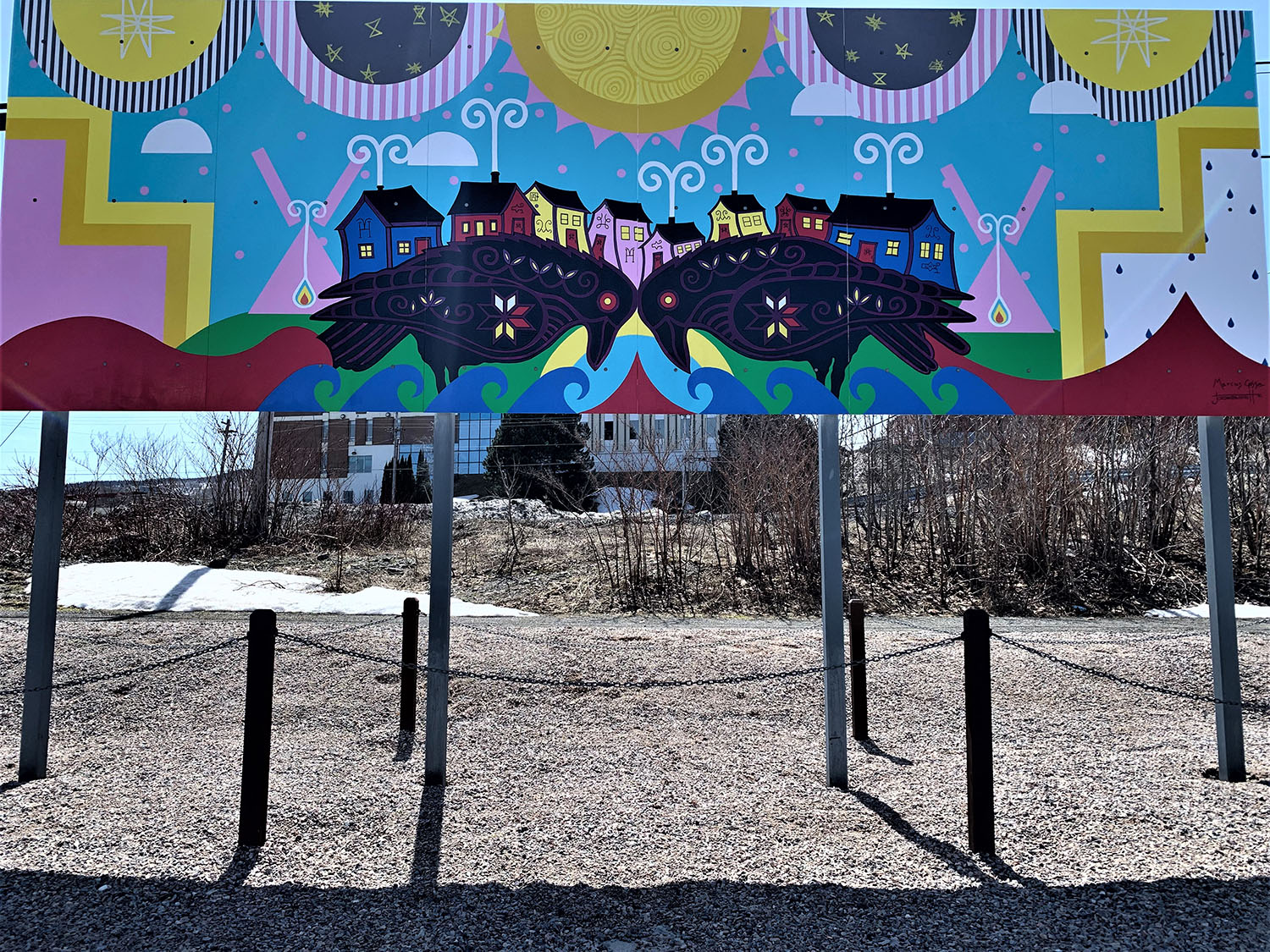 by Jordan Bennett and Marcus Gosse

Located less than 2 km from downtown Corner Brook, the village of Crow Gulch was populated in the 1920s until it was bulldozed in the 1960s and its residents, who were mostly Mi'kmaq, were pressured to relocate (approximately 45 families). People moved to the area in search of construction work building the pulp and paper mill, and its promise of well-paying jobs. Residents experienced terrible poverty and stigma; municipal services such as power, water, sewer, fire prevention and garbage collection were never connected to the community. In 2021, Mi'kmaq artists Jordan Bennett and Marcus Gosse were commissioned by the City of Corner Brook, under the Downtown Urban Design Action Plan, to create this large mural, which stands near the site of where the community of Crow Gulch once stood. The mural (7 metres long and 2 metres wide) features many symbols, including two prominent crows — a nod to the spiritual presence of their ancestors.

"What we're trying to say is that the ancestors are with us in everything we're doing. They're proud that Indigenous culture is doing really well now," Gosse said.

"We live on a beautiful island that's rich in Mi'kmaq culture, and that's had some really beautiful communities with lots of memories. We want to showcase that in this painting." More Info - CBC

Jordan Bennett is a Mi’kmaq visual artist from Stephenville Crossing, Ktaqamkuk (Newfoundland) who lives and works on his ancestral territory of Mi’kma’ki in Terence Bay, Nova Scotia. His ongoing practice utilizes painting, sculpture, video, installation and sound to explore land, language, the act of visiting, familial histories and challenging colonial perceptions of Indigenous histories, stereotypes and presence with a focus on exploring Mi’kmaq and Beothuk visual culture of Ktaqamkuk. Jordan has participated in over 75 group and solo exhibitions nationally and internationally and has been the recipient of several awards and honours. Most notably, he has been long listed for the 2015 and 2016 Sobey Art Award, was shortlisted for the 2018 Awards and was a long list winner in 2020. He holds a BFA from Sir Wilfred Grenfell College, Memorial University and an MFA from the University of British Columbia, Okanagan.

Marcus Gosse is a Mi’kmaq artist and a member of the Qalipu Mi’kmaq First Nation Band in Newfoundland. He incorporates the ancient Mi’kmaq Star, Mi’kmaq Petroglyphs, Hieroglyphs and various double curve designs into the landscapes of his paintings. In 2009, Marcus' painting "Seeking Mi'kmaq Enlightenment" was exhibited in a group show by the Art Gallery of Nova Scotia in Halifax, and is now part of their permanent collection. Since 2014, The Rooms Provincial Art Gallery in St. John's has also acquired several of his paintings. In 2017, Marcus was invited to participate, and exhibit 12 pieces, in the Canada 150 Art Show at the Macaya Gallery in Miami, Florida. He has participated in several art shows in Atlantic Canada, and his pieces have been sold to art collectors around the world.